A telenovela[a] is a type of a television serial drama or soap opera produced primarily in Latin America.[2] The word combines tele (for "television")[b] and novela (meaning "novel").[c]Similar genres around the world include teleserye (Philippines), téléroman (Canada, specifically Quebec), or simply dramas. 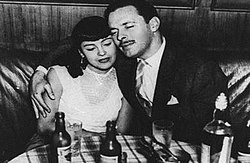 Commonly described using the American colloquialism Spanish soap opera, many telenovelas share some stylistic and thematic similarities to the soap opera familiar to the English-speaking world. The significant difference is their series run length; telenovelas tell one self-contained story, typically within the span of a year or less whereas soap operas tend to have intertwined storylines told during indefinite, continuing runs.[3][4] This makes them shorter than most other television series, but still much longer than a miniseries. This planned run results in a faster-paced, more concise style of melodrama compared to a typical soap opera.[5] Episodes of telenovelas usually last between 30 and 45 minutes, and rarely more than an hour, except for final episodes. The telenovela combines drama with the 19th-century feuilleton, and naturally evolved from the Latin American radionovela, according to Blanca de Lizaur.[6]

The medium has been used frequently by authorities in various countries to transmit sociocultural messages by incorporating them into storylines.[7] By the 1950s, Brazil became one of the first countries to produce novelas with high budgets and aimed both to the national and international markets. Mexico soon followed, and by the 1970s and 1980s the country started to engage more profusely in using telenovelas to shape behavior. This was particularly successful in introducing the idea of family planning. The 1990s played a key role in the international export of telenovelas, thus the so-called 'Telenovela Craze' that spread in many regions in the world. [8]

By 2018 some signs of fading popularity had emerged.[9]

Brazil is considered the pioneer of the telenovela genre. In 1951 Brazil produced Sua vida me pertence ("Your Life Belongs to Me"), the first telenovela in the world. In 1952 Cuba released Senderos de amor ("Paths of Love") and Mexico released Ángeles de la calle("Angels of the Street"), shown once a week. Between 1957 and 1958 Mexico produced its first drama serial in the modern telenovela format of Monday to Friday slots, Senda prohibida ("Forbidden Path"), written by Fernanda Villeli. The first global telenovela was Los ricos también lloran ("The Rich Also Cry", Mexico, 1979), which was exported to Russia, China, the United States and other countries.

HOW TO CHOOSE THE RIGHT ELITE INDEPENDENT DELHI ESCORT?

Harry Styles thanks fans for reuniting him with lost ring

FOOTBALL IS NOT NONSENSE, LADIES